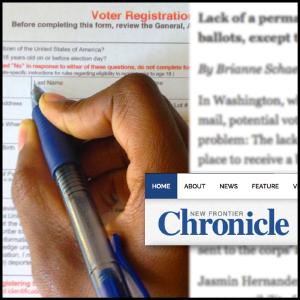 Lack of a permanent mailing address means there’s no place to receive ballots, except the corps.

In Washington, where elections are conducted exclusively by mail, potential voters without a permanent address have a problem: The lack of a mailing address means they have no place to receive a ballot.

Thus, The Salvation Army in Bremerton is partnering with the Kitsap County Auditor’s Office to register people to vote, allowing people experiencing homelessness to have a ballot sent to the corps’ address.

Jasmin Hernandez, 28, didn’t know that registering to vote was a possibility for her. Currently homeless, Hernandez wasn’t planning on voting in the upcoming presidential election until she heard about the registration drive at The Salvation Army.

“I had no idea that we could register to vote,” she said. “I thought you had to have a permanent address.”

This will be Hernandez’s first time voting in a presidential election, and she’s excited.

“I want to give a big thank you to Sheryl [Piercy], Major Ramsey [corps officer], and the whole Salvation Army—not only for this but for everything they’ve done for me,” Hernandez said.

She was one of 35 people who registered to vote at the Bremerton Corps during its first registration drive in March. The event was strategically held at the end of a long month, when the need for services is high.

“Registering them is the first step to getting them to the finish line, which is casting a ballot in local, state and national races,” said Kyle Joyce, elections division manager for the Kitsap County auditor.

Sheryl Ann Piercy, social services director for the Bremerton Corps, promoted the registration drive with posters and flyers. She also created excitement by talking with clients, emphasizing the sense of community that voting can build.

“Some people have been homeless or struggling for years, and it never crossed their minds that they could vote,” Piercy said. “And now they’re connected. Now they know that they matter.”

People will receive their ballots when they come to the corps for a meal or other services.

“I’m hoping that will light a fire in the people who didn’t register at the drive, for whatever reason, and clients may come up and say they wish they registered,” Joyce said. “Then we’ll come back and register them, too.”

The Kitsap County Auditor’s Office will also add the Bremerton Corps as a mobile voting location for Washington’s August primary and the November general election, allowing people to register to vote or get replacement ballots at the corps.

“We will be doing a lot of things for folks leading right up to the general election,” Joyce said. “We really just want to make this as easy as we can.”

Increasing criminalization, voter identification laws and the rapidly rising cost of housing, childcare, and education are all factors that can contribute to low voter turnouts for people experiencing homeless or people at risk of homelessness, said Tristia Bauman, senior attorney at the National Law Center on Homelessness & Poverty.

Turnout among homeless voters is one of the lowest for any demographic.

“Homeless people have few traditional sources of power available to them,” Bauman said. “Political power obtained through voting is oftentimes the best and maybe even only way for an otherwise disenfranchised group to have a voice and be able to assert their rights. It’s critical for them to vote so that their voices are heard and their interests are represented. Without that, decisions that affect them are made without their input.”

The continued work of The Salvation Army relies on the generosity of donors. If you would like to help us provide programs such as disaster response services, shelters for those affected by domestic violence or homelessness, food banks and nutrition programs, as well as other vital services, please consider making an online donation today. Your donation will stay within your community to fund much-needed community programs for those in need. Every donation you make helps The Salvation Army continue "Doing The Most Good" today and in the future.